Post-election violences in Benin : A heavy record of seven (07) deads, with several serious casualties The opponents are conducting an investigation through international bodies to situate the responsibilities

Par LA REDACTION Last updated Fév 8, 2021
0 2 776
Partager
Post-election violences in Benin
A heavy record of seven (07) deads, with several serious casualties
The opponents are conducting an investigation through international bodies to situate the responsibilities
Published on 05/05/2019 at 10:47 AM
By Loth HOUSSOU, La TEMPÊTE 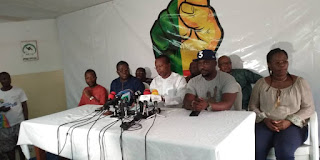 The clashes known on  May 1rst and 2nd, 2019, in the aftermath of the legislative elections of April 28th, which occurred after the supposed « attempted arrest of former head of State Boni Yayi » recorded a heavy balance sheet.
Lire aussi
1

LA REDACTION Déc 8, 2022 641 0
Apart from the material damage that could be quantified to several millions of CFA francs (the break and fires of the new vehicle sales fleet; gas station, electric poles, etc.), many losses in human lives make unfortunately the balance sheet.
According to the opposition forces in front of the media professionals last Friday May 3rd, 2019 at the headquarters of « Vidolé » now called « national siege of resistance », seven (07) Benineses civilians were killed by bullets, including 05 in Cotonou and then 02 in other localities of the country.
Among these victims, there is a pregnant woman who was shot, while being cut off in front of the portal of the former President of the Republic, as many other citizens. To these citizens who died for the homeland, there are several wounded between life and death, in emergency care in several hospitals including the National Hospital University Centre (CNHU) in Cotonou.
According to Eric Houndété, first Vice-President of the National Assembly of Benin and spokesman for the occasion, the opposition forces had not foreseen any demonstrations on Wednesday, May 1rst, contrary to what the Minister of the Interior and public safety said, because of the presence of law enforcement in the vicinity of the private domicile of the former head of State of Benin, Boni Yayi.
After expressing their deepest condolences to the families of the victims, the opposition forces denounced the use of firearms on civilian populations with bare hands, real acts of barbarism to never wish in Benin known throughout the world as a country in which a lasting peace reigns.
« We are demanding an investigation into the oversight of international bodies, on the death of compatriots who have fallen on the bullets of Patrice Talon’s power, » said spokesman Eric Houndété, in order to situate the responsibilities.
We’ll get back on it.
0 2 776
Partager